With all but a small handful of states under a stay-at-home order, fewer people are out on the roads. According to one report, that has cut traffic crashes in California by half.

On April 1, the Road Ecology Center at the University of California, Davis, released a special report titled “Impact of COVID19 on California Traffic Accidents.” According to the report, “collisions and especially injury and fatality collisions have been reduced by half” in California since the stay-at-home order was issued on March 19.

“There is no equivalent in our recent transportation history to such large changes in vehicle movement on our state and local roads,” the report states. “The reduction in traffic collisions and injury/fatal accidents in particular, was correlated with a similar percentage reduction in traffic volumes on a wide range of highways statewide.”

Reductions in injury/fatal crashes did not occur primarily in any certain area in California. According to the report, there was an even distribution in the reduction in those traffic crashes. 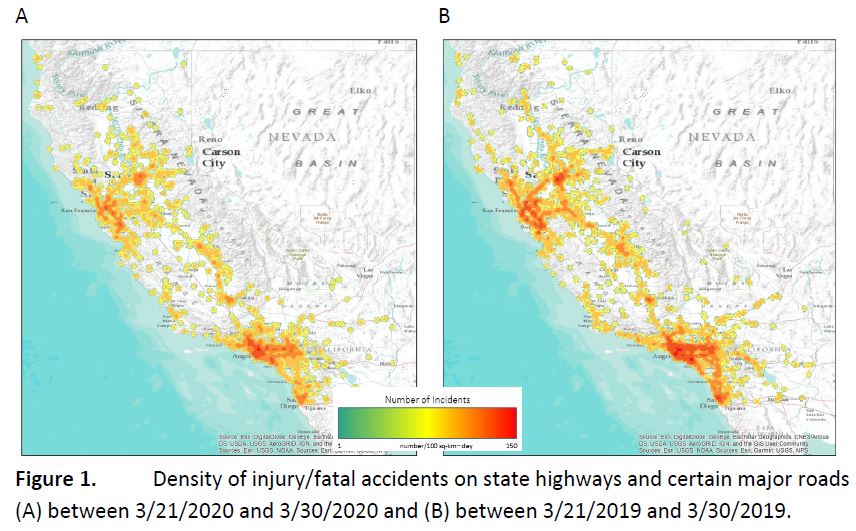 However, animal-related crashes did not experience a similar reduction.

Researchers surmise this could be because not enough time has elapsed or even a 50% reduction in traffic “is still not enough to measurably benefit wildlife and domestic animals,” according to the report. Another possibility is speed. Vehicle speed is a significant factor in animal-related collisions. With less traffic, average vehicle speeds may have increased.

For traffic in general, traffic volumes reduced by 30-50%.

Traffic volumes nationwide are dropping as a result of the COVID-19 pandemic. On March 31, the Nebraska Department of Transportation released COVID-19-related traffic data showing a large reduction in traffic volumes.

Land Line recently reported on data from the American Transportation Research Institute revealing a reduction in traffic in some of the nation’s worst bottlenecks.

“Spaghetti Junction is typical of what we’ve seen across the country, especially in areas hit hard by the virus and subject to quarantines and lockdowns,” ATRI president and COO Rebecca Brewster said in a news release. “As other traffic dissipates, trucks continue to move, delivering much-needed relief supplies to markets, hospitals, gas stations and other essential businesses.”