AV testing transparency tool is anything but transparent

The brand new website allows the public to find information about on-road AV testing in their area. The tool is part of the Automated Vehicle Transparency and Engagement for Safe Testing (AV TEST) Initiative. How transparent is it? Let’s take a look.

Here’s the first thing you see when accessing NHTSA.gov/AVtest. 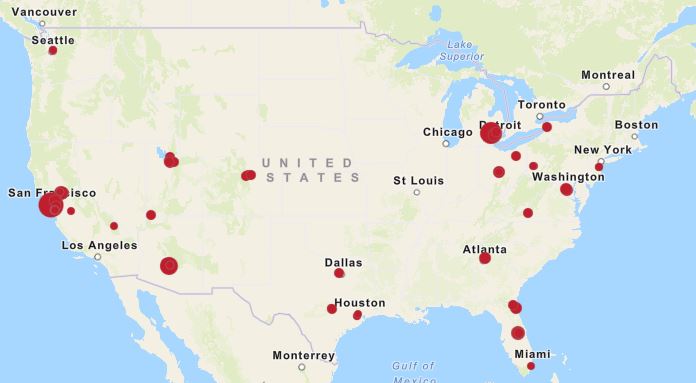 The red circles you see denote where AVs are being tested. The larger the circle the more vehicles being tested. That large circle in San Francisco is for 230 GM Chevy Bolts being deployed in the area. When you click a circle, details about the testing pops up.

The transparency tool also shows what road types are being used for testing. Also, the website shows what type of vehicle is being tested.

All of this sounds great. However, the transparency tool is more symbolic than it is useful.

However, there are some glaring omissions from this list, including Tesla. Aside from Waymo, there is no other AV truck company on the list. Embark, TuSimple and every single truck manufacturer are notably missing from this “transparency” tool.

In fact, of the more than 50 vehicles listed on the AV TEST website, there is only one heavy truck. Many AV stakeholders have said that heavy trucks will be among the first self-driving vehicles available due to the relatively limited amount of technology needed to navigate highways versus congested urban streets. How much transparency can there be if only one truck is being tracked?

What kind of data does the public have access to? Not much.

At least nothing that isn’t already available. According to the website, the following data can be submitted by any of the nine participating companies:

However not a single car or truck is reporting top operational speed, which is a bit of information many would love to know. So much for transparency there.

The website can also show you zones where the testing is being done, which some entries do. Even better, the map can also reveal the exact routes of the testing. However, no one is submitting that information either. That would be too transparent, after all.

In reality, nothing of significance can be found on this transparency tool.

That’s mostly because all data submitted is voluntary. No one is going to publicly release data about whether or not any of these AVs crash or how successful the testing went. Often, the most useful information has to be mandated. For instance, that’s why the Freedom of Information Act exists. Without something equivalent to FOIA, AV companies are only going to give us the equivalent of heavily redacted documents if anything at all. With only nine of dozens of AV companies being represented, we’re not even getting a snapshot of the reality of AV technology.

Not to sound like a jerk, but this tool is useless. To call this “transparency” is nothing more than an attempt to please the public. In the words of Inigo Montoya in “The Princess Bride,” “You keep using that word. I do not think it means what you think it means.”