Even with forward movement on HOS reform, the OOIDA Board of Directors plot and plan strategies on a number of issues.

With 2018 winding down and unprecedented forward momentum on the push to meaningful change to the hours-of-service regulations, the Owner-Operator Independent Drivers Association Board of Directors looked to the future.

During its fall meeting in November, while hours of service obviously was a major topic of discussion, members of the OOIDA Board tackled countless issues, many centered on over-regulation and the burdens placed on owner-operators, small-business truckers and company drivers. 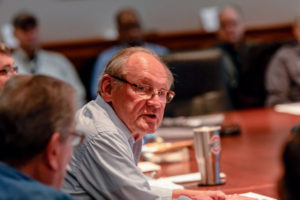 For years, OOIDA has remained steadfast in its claim that an increase in regulations doesn’t lead to an improvement in highway safety. During the OOIDA Board of Directors meeting, FMCSA Administrator Ray Martinez echoed the Association’s words.

“I know the best way to move the needle forward on safety isn’t by adding more regulations,” Martinez said.

Martinez and Joe DeLorenzo, FMCSA’s director of enforcement and compliance, attended the meeting at OOIDA’s headquarters in Grain Valley, Mo., to discuss a variety of trucking topics with OOIDA’s board members and prospective alternates, who possess more than 800 years of combined trucking experience.

“If you can manage to rack up millions of miles without running into anything, then you probably know what you’re talking about,” OOIDA President Todd Spencer said. “This is an experienced group of people, but in addition to having experience they have hauled everything. Trucking is a very diverse industry.”

The FMCSA leaders visited OOIDA for more than three hours and seemed receptive to listening to suggestions from real truckers and to eliminating regulations that don’t improve safety.

DeLorenzo said a key to affecting change in the industry is by offering a solution rather than just complaining about an existing regulation. He also gave credit to OOIDA for being the first group to petition for a change to the hours-of-service regulations. Since OOIDA’s petition, FMCSA issued an advance notice of proposed rulemaking regarding possible changes to the hours of service.

“People ask ‘what can we do?’ The first thing is to stop complaining about it and do something,” DeLorenzo said. “You guys were the first ones to come forward with a petition on the hours of service.”

Martinez was sworn in as sixth administrator of the FMCSA in February 2018. Since that time, Martinez said he has been dedicated to hearing from real truckers in an effort to improve safety while decreasing the burden on drivers and the industry.

“I’ve been on the job 10 months now, and it has been an education. I’m used to not being the most popular guy in the room. This industry isn’t made up of shy wallflowers,” Martinez said. “If you ask 100 truckers something, you may get 150 opinions. But most of the suggestions have been constructive, and some of them were things that are physically impossible for me to do.”

The voices of the OOIDA board members to FMCSA’s leaders certainly weren’t shy, but they also were constructive.

“Too often, you’re looking at the letter of the law rather than the spirit of the law,” said Chuck Paar, an OOIDA alternate board member. “That’s what the ELD did. Now, drivers are focused on that ELD before the minute that they turn into a pumpkin. That’s causing people to speed in order to get stopped on time. That’s not safety. There’s no common sense.”

Offering a possible solution to the current hours of service regulations, OOIDA Board Member Johanne Couture said the agency should look at Canada’s regulations.

“Canadian drivers don’t complain about our hours of service,” said Couture, a board member from Ontario, Canada. “They offer more flexibility.”

Danny Schnautz, a prospective OOIDA board alternate from Texas, said FMCSA needs to stop the relationship between compliance and revenue.

“Why would you need to inspect someone that is safely parked? The answer is revenue,” Schnautz said.

The meeting ended positively, and Martinez told the board members that he wants continued feedback in hopes of eliminating burdensome regulations.

“The invitation to OOIDA and the industry is to tell us,” Martinez said. “Tell us which regulations need reformed.

“I get credit for the regulations we can eliminate. Trust me, President Trump wants that.”

Another hot issue for truckers is the crumbling infrastructure, how improvements and repairs will be funded and, perhaps most importantly, by who.

“We have been facing big time pressure to toll our roads, all of them,” Spencer told the board members. “We don’t think for one minute truckers will be treated fairly.”

To back that up, OOIDA’s litigation counsel The Cullen Law Firm, made presentations on a variety of litigation efforts the Association is involved with. One such lawsuit is against the Pennsylvania Turnpike Commission. 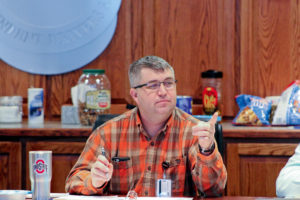 Paul Cullen Sr. told the board that, if successful, the lawsuit could be financially crippling to the Pennsylvania Turnpike Commission, potentially to the tune of $1.8 billion. (Read more about the lawsuit on Page 36.)

And, when the topic of tolls comes up, inevitably the Indiana Toll Road comes up in conversation. The Association has called for a boycott of the Indiana Toll Road over the latest truck-only toll increases. During the meeting, the board members also discussed other strategies to put pressure on the state and former supporters of leasing the toll road to a private firm. Short version: Stay tuned. There is more to come on this front.

One of the three prongs of advocacy OOIDA actively engages in is litigation – with the other two being legislative and regulatory lobbying efforts.

One major victory that OOIDA enjoyed recently was a $44.4 million judgment against the state of New York for its $15 registration fee. The success of that lawsuit and its potential ripple effect to stop predatory fees and taxes on truckers is bolstered by a big win in Alabama years ago.

“If you want to have rights, you continually have to defend them,” Spencer told the board members about the New York case. “We have seen this movie before.”

Alabama was discriminating against out-of-state truckers by requiring them to pay a marker fee, which was not required of in-state truckers. OOIDA filed a successful lawsuit that resulted in a refund on more than $68 million.

“There was a point we were suing almost as many states than we weren’t,” Spencer said. “Now we are seeing variations of these things again.”

The electronic logging mandate was again discussed during the litigation report to the board. Discussions included a variety of strategies to weaken the overall mandate. One such action was a lawsuit filed by OOIDA against the state of New York seeking to halt enforcement of the mandate because the state lacked authority to enforce federal regulations, because they had failed to adopt the ELD regulations into state law.

“Civil rights stuff will pop up again, and there are a lot of other groups out there jumping up and down saying they represent truckers. They aren’t doing any of this stuff. They can’t, and they won’t,” Spencer said.

More than hours of service

Not to be distracted from other pressing regulations in dire need of change by the hours-of-service reform, the OOIDA government affairs team highlighted the many issues on their radar.

Challenges ahead include additional attempts to increase the minimum required insurance on motor carriers, underride guard mandates that would include side and front underride guards and speed limiters.

“With any Congress, depending what party is in power there are issues we will face. With the Democrats taking control of the House, we could potentially see some of these issues resurface in the next congress,” OOIDA Director of Legislative Affairs Collin Long told board members.

He said there could also be new traction on the front of detention pay, training and overall compensation.

Long-standing issues like truck parking have the government affairs team working hard to shift the legislative focus from technology and alerts on existing parking availability to increasing capacity. 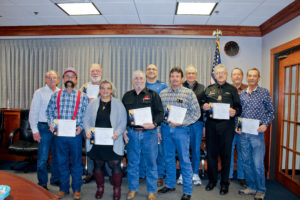 With the death of OOIDA’s longtime president Jim Johnston, more recent death of OOIDA Board Member Steve Davenport and the retirement of OOIDA General Vice President Woody Chambers, three board positions with partial terms were also open for election.

Two of the open seats had terms expiring in 2020. Board alternates Dave Jungeblut and Chuck Paar were elected to those seats. The third seat had a term remaining that expires in 2022, and it was filled by alternate Doug Smith.

Davenport’s death, happening only weeks before the board meeting, was recognized with a moment of silence at the opening of the board meeting. He was remembered and honored for his commitment to Vietnam veterans, Prisoners of War and Gold Star Families by an impromptu passing of the hat for donations. The board raised $1,069 during the board meeting. It will be donated to the Vietnam Veterans Memorial Fund in Davenport’s honor. Run for the Wall’s Missouri chapter agreed to match that amount, bringing the total to $2,138. LL

With a shift in party control of the House, we rank the top pet issues of lawmakers as to what will likely see action and maybe traction in 2019.