Truckers have gotten louder. Decision-makers say they are listening.

This should not be a revelation. People from every profession seek respect and appreciation for the work they do.

However, the lack of respect seems all too common when it comes to the men and women who keep America moving and make sure everything used in the lives of Americans is delivered. Whether it’s detention time, a lack of truck parking, the large fleets’ constant attempts to drive down wages, or inflexible regulations, the frustrated voices of truck drivers are getting louder.

Those voices are absolutely necessary for any change to occur, OOIDA President Todd Spencer told a group of members in March at the Mid-America Trucking Show.

“No matter what we do, we’re not going to be able to make the world treat truckers nice,” Spencer said. “They’re not going to pass a law where they have to treat you nice. Drivers themselves have to make noise when the companies that they work for are taking advantage of them.

“As long as drivers are willing to put up with some of the crap that goes on, it’s really hard to get it changed.”

The good news is that more drivers are answering the call. Truckers are reaching out to lawmakers, commenting on rulemakings and attending public listening sessions in hopes of sparking change and receiving the respect they deserve.

Recent actions and comments from government leaders give reason for truck drivers to be cautiously optimistic that their voices, indeed, are finally being heard. The coming months will reveal whether real change is coming or if the promises are nothing more than empty talk.

‘The department has taken your comments to heart’

During an announcement at MATS, Department of Transportation Secretary Elaine Chao told truck drivers that their comments do matter. Chao revealed that a notice of proposed rulemaking regarding hours-of-service reform had been sent to the White House Office of Management and Budget for review. (See page 22 for full story).

Chao hinted that drivers’ request for more flexibility within the hours of service will be addressed in the rulemaking. FMCSA received more than 5,200 comments after the agency issued an advance notice of proposed rulemaking on hours of service. Many of those comments were from truckers telling the agency that the current regulations were too rigid and unsafe.

“The department has taken your comments to heart,” Chao said.

“You told the department what you wanted. You wanted flexibility in hours of service, and we listened.”

Chao also told the truckers that funding is being set aside to address the lack of safe truck parking and that the department will work toward getting Americans to understand that “food doesn’t show up in the grocery stores by magic.”

“We need to remind America that trucking moves

70 percent of domestic freight,” she said.

Results from a recent OOIDA Foundation survey found that many truck drivers believe unpaid detention time is an issue that affects safety as well as their finances.

The research arm of the Owner-Operator Independent Drivers Association surveyed more than 1,250 truckers about the period of time when a driver is not paid while waiting to be loaded or unloaded.

According to the survey, 18 percent of drivers said they do not receive detention pay and only 29 percent said they receive it on all loads.

“Many … felt that detention time not only impacted their financial livelihood but that it also negatively impacted safety on the roadways,” the OOIDA Foundation wrote. “As one member stated, ‘this is one of the biggest issues affecting hours of service and safety.’ Drivers encountering unexpected long detention, feel forced to drive faster, harder and longer to make up for perceived lost time.”

The issue came up at OOIDA’s Town Hall Meeting at MATS.

“This is another issue where OOIDA is the sole voice for changing the system to where every driver gets paid,” Spencer said. “Big carriers have been paying their drivers or some of their drivers’ detention for a long time. And it is in fact a profit center for them in many areas as well. And some big carriers get treated differently in the loading and unloading environment because of that. We’re not going to get any help from these carriers or ATA when it comes to addressing drivers being detained, because their members who put in the biggest amount of funds are happy with it just the way it is. That makes our challenge bigger.”

OOIDA is hopeful at a change in leadership in the U.S. House of Representatives opens a door to address detention time. Transportation Committee Chairman Rep. Peter DeFazio, D-Ore., has been an advocate for OOIDA on the issue.

For years, OOIDA has stood against the claims of ATA and large carriers that there is a driver shortage. The Association has not wavered from its stance that it was a problem of turnover and that if there was a driver shortage, then that would be reflected in the wages of drivers. The claim that there was a shortage of truck drivers without a major increase in wages went against the principle of supply and demand, Spencer said.

After years of being the lone voice of reason in the industry, a federal report was published in March that affirmed OOIDA’s view that there is no driver shortage.

The report by the U.S. Bureau of Labor Statistics argues that the trucker driver market is working just as well as other blue-collar job markets, which can be solved by increasing wages.

The bureau concluded that the evidence does not support the theory of a labor shortage within the trucking industry and that increasing wages could alleviate any issues with recruitment and retention.

“As a whole, the market for truck drivers appears to work as well as any other blue-collar labor market, and, while it tends to be ‘tight,’ it imposes no constraints on entry into (or exit from) the occupation,” the report states. “There is thus no reason to think that, given sufficient time, driver supply should fail to respond to price signals in the standard way.”

While ATA has been at the forefront of pushing the “driver shortage” narrative, OOIDA has always maintained that the issue is a lack of pay, not drivers.

According to the report, a labor shortage in any market is generally alleviated in the short term by wage increases. In the long term, the shortage is corrected through the influx of new employees in response to higher wages.

As expected, people with higher weekly earnings are less likely to leave driving. Chances of a for-hire driver leaving decreases by 16 percent with increased wages, compared with 25 percent for private carriage drivers.

Data showed that workers coming into trucking were generally making less money. This suggests that people entered the industry to make more money than they were initially making. An expectation of an earnings gain increases the likelihood of entering a driving job in for-hire transportation by 29 percent.

OOIDA has more than 160,000 members, and Spencer said that is not nearly enough. If truck drivers want to see real change and earn the respect they deserve, then they need to take a unified stance for truckers’ rights, Spencer said.

Kathy Jungeblut, wife of OOIDA Board Member Dave Jungeblut, told truckers that there’s an easy answer for those who ask “What does OOIDA do for me?”

“OOIDA gives you a voice in Washington,” she said. LL

Four lawmakers introduced the Stop Underrides Act on March 5. S665 and HR1511 would require tractor-trailers to have underride guards on the sides and front. 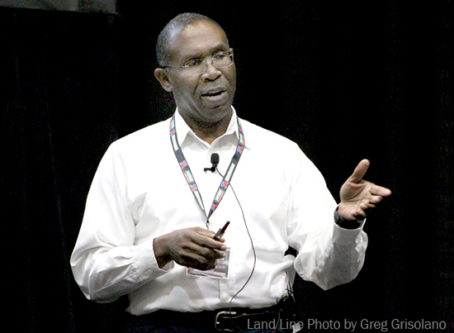