Q. I own a 2014 Pete with a Cummins 475. I started doing oil analysis about a year ago, and all my reports have come back good. I was in a discussion at dinner in a truck stop, and someone said to have a sample of new oil tested along with the used oil. I think that’s weird because it’s new oil. What do you think?

A. I think it makes sense for several reasons. Most truck stops and shops purchase their oil in bulk. That means that it goes from the refinery into barges, then into tanker trucks or into the distributors’ storage tanks. From that storage, it goes into your shop’s storage and finally into your crankcase. At every transfer point it is exposed to dust and chemicals in the air. It’s only a small amount, but when we’re dealing with parts-per-million, even a small variation in silicon or chemical content can skew an interpretation of the results.

Oils vary from brand-to-brand and sometimes from batch-to-batch on the types and quantities of additives used to give the oil its protective and performance-improving characteristics. Oil analysis measures the quantities of the elements in the oil. By providing a sample of the oil before and after use, the analysis lab can better determine what is happening inside your engine during operation.

It’s also a good way to determine the quality of the oil you purchased. Just because you buy a branded container of oil from a store, don’t think that’s a guarantee that the oil inside is in pristine condition. A few years ago, a family member bought several cases of oil for his vehicles. He changed oil and very shortly the engine started running roughly. He drained the oil and found a gritty substance in the oil, along with unusually high levels of wear metals. He opened another brand-new container and found a similar gritty substance. He complained up the distribution chain to the manufacturer, who sent a representative to investigate.

There were six jugs of oil left. The field engineer argued that his company’s quality control could never allow such a thing to happen, and they denied the claim for the engine overhaul. My brother-in-law opened the next jug: crystal clear. Then the next: same result. But on the third try, out came the same gritty substance that was in the engine. With three unopened jugs left from the lot he bought, the oil company decided not to risk a court case. They paid for a new engine. The moral of the story is that even the largest companies are not perfect. And the answer to your question is, yes. Even though it’s “new” oil, check it before it goes into your engine so you can have an accurate benchmark for subsequent tests.

Q. I have a 2011 Mack Pinnacle. It’s kind of plain now, but I want to start showing it at truck shows. I have to do it in stages since I earn my living with it. It’s all black except for some pinstriping, so when I saw that Alcoa came out with black aluminum wheels, I thought they would look great on my truck. I want to call it the Big Black Mack Attack.

But here’s my question. I’m running Bridgestone 265/75R22.5 tires. They give me a comfortable ride and decent life. But I keep reading about wide single tires giving better fuel economy so I wonder if I switch wheels should go to the extra wide Alcoas and change to wide singles? I heard you need higher air pressure with the wide tires. Will this hurt my ride? What do you think?

A. I think your Mack will be a beauty when you get it finished. Wide-base singles are proven fuel savers, so after just a few years, you should have a nice return on your investment. One wide-base tire costs less than two standard low-profile radials and you’ll have two fewer sidewalls flexing at each wheel end. That is a major contributor to the fuel economy improvement. But you will have to increase tire pressures. According to Bridgestone’s load-inflation tables, you should be running your drive tires at 80 psi, assuming a normal 34,000-pound loading on your drive tandem. For the same load, the 445/50R22.5 wide-base tires will require 100 psi. I don’t think you’ll notice much difference in ride quality.

According to Alcoa Wheels’ product sheet, the part number for the 22.5 x 12.25 black aluminum wheel for your Mack is 8246BLK. For the matching 22.5 x 8.25 wheel for your steer axle, it’s ULTRABLK. Hub covers are 0VXC1X for the front wheels and 0XXE1X for the drives. If you’re ordering from Mack, specify wheel finish 49A-BAX for the fronts, 2357004 for the rears.

Q. I’ve been using retread tires for years. I get them from my Bandag dealer. They have a good reputation, and I’m told they have a good service network. I never had to use it. I know they’re made right, not like the gators you find along the highway. But now my dealer is trying to sell me retreads for my steer axle. I keep telling him it’s illegal to run retreads for steer tires, and he keeps telling me I’m wrong. Am I?

A. Most of the gators have wires showing. They are usually original treads, the result of underinflation or damage, not retreading. According to Federal Motor Carrier Safety Regulations FMCSR Part 393.75(d), only buses are prohibited from using retreads on front wheels. In fact, in TMC Recommended Practice RP 253, applications “that are well suited for use of retreaded steer tires” are high-stress heavy duty vocational applications, including emergency vehicles. As long as proper nondestructive testing is done on the casing and specified manufacturing procedures are followed, which your supplier does, retread steer tires are safe, economical and legal. LL 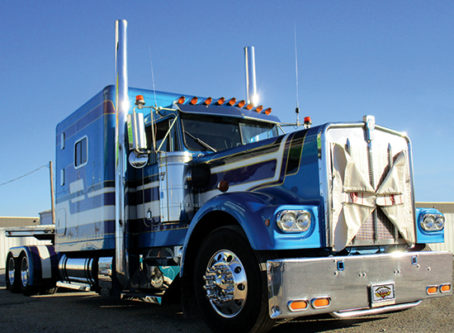 Bryan “Boss Man” Martin of 4 State Trucks is back with another edition of advice on how to customize trucks. This month – a 1982 Kenworth W900A.

It’s almost tax season. Get the answers to your questions about the hows and whys of income tax projections as we close out another fiscal year.

We take the practice of law very seriously. Some lawyers have forgotten their oath. Prosecutors, it’s time you wake up and smell the law. Do your duty!