Two more Celadon executives were indicted by the U.S. Securities and Exchange Commission for their alleged role in a fraud scheme worth tens of millions of dollars.

On Dec. 5, the SEC filed a civil complaint against former Celadon Chief Operating Officer William Eric Meek, 39, and former Celadon Chief Financial Officer Bobby Lee Peavler, 40. The complaint accuses the two men of taking part of a “complex securities and accounting fraud scheme that resulted in a loss of more than $60 million in shareholder value,” according to a U.S. Department of Justice news release.

The scheme is the same one that involved former Celadon CEO Danny Ray Williams. Williams was indicted on both civil and criminal charges earlier this year for his role in the scheme.

From 2016, Celadon-owned Quality Companies owned hundreds of trucks that were overvalued on its books by tens of millions of dollars. Quality Companies was unable to find drivers interested in leasing certain trucks due to prior defects. Those defects had caused a significant fall in the trucks’ value. However, Meeks, Peavler and Williams failed to disclose the millions of dollars lost as a result of the diminished market value of these assets, the indictment alleges.

Rather, federal prosecutors say the high-ranking Celadon executives pursued a series of transactions designed to get rid of the trucks without publicly reporting the loss.

Quality Companies then engaged in simultaneous “sales” and “purchases” of trucks with the dealer at inflated prices, which avoided disclosing the fact that the trucks were worth far less.

More specifically, the executives provided the dealership with a list of trucks Quality wanted to sell with the company’s overinflated book value for each truck. The dealership would then calculate how much the trucks were overvalued by then inflating its invoices to Quality Companies. The net effect was to create trades with values on both sides inflated by millions of dollars, according to the indictment.

According to a Department of Justice news release, Celadon provided trucking and transportation services in the United States, Mexico and Canada. Between 2013 and 2016, Quality’s inventory grew rapidly, from approximately 750 tractors and trucks to more than 11,000. Quality began to struggle financially in 2016 as a result of a slowdown in the trucking market.

Last April, Celadon agreed to a $42.2 million settlement after the DOJ and SEC launched an investigation.

Celadon is required to pay full restitution to shareholder victims harmed as a result of the crimes. Furthermore, Celadon agreed to implement rigorous internal controls and cooperate fully with the DOJ’s ongoing investigation, including its investigation of individuals. Prosecution of the company for securities fraud will be deferred for an initial period of approximately five years to allow Celadon to demonstrate good conduct.

“The settlements with DOJ and SEC mark an important milestone. We have now settled the governmental investigations and other legal proceedings related to the events that arose under prior management. We appreciate the government’s recognition of the significant changes we have made, our ongoing commitment to legal and regulatory compliance, and our significant cooperation in the investigations. With these legal issues resolved, we will focus on continuing to strengthen our corporate controls and procedures and pursuing a long-term capital structure and the operational turnaround of our core, asset-based truckload transportation business.”

In July, Williams reached an agreement with prosecutors for the civil case. Williams will pay civil penalties to be determined at a later date. Sentencing for the criminal charges is scheduled for Feb. 13.

As of press time, neither Meek nor Peavler had entered a plea. LL 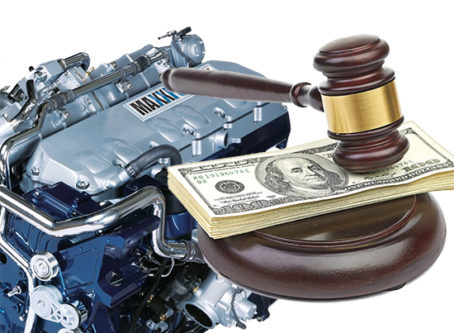 After several years of litigation, owners of certain Navistar trucks with a defective MaxxForce engine are closer to being compensated.