Driverless trucks were the focus of an extended segment of the CBS News program “60 Minutes.”

Linda Allen, a trucker and OOIDA board member from Spring Hill, Fla., also was featured on the program, which aired Sunday, March 15.

While “60 Minutes” opened the segment by declaring autonomous trucks as the new “kings of the road,” Allen and other drivers say we should be pumping the brakes on the notion that a driverless future is just around the corner.

Allen said she was “disappointed” that the segment seemed to downplay or omit some of the concerns she and her fellow drivers expressed about driverless trucks. Some of those would include safety and security, particularly cybersecurity.

“They sat down and talked with me and three other drivers for four hours and we covered a lot of the potential problems we saw (with autonomous trucking),” she told Land Line Now on March 16.

The truck drivers in the segment, including Allen, said there are a lot of safety concerns involving driverless trucks.

“There are too many things that can go wrong,” Allen said during the segment. “I was on I-75 last month. There was a bad accident, and the state trooper came out and started hand-signaling vehicles, ‘You go here. You go there.’ How’s an autonomous truck going to recognize what an officer wants you to do. How’s that going to work?”

Another area that Allen says the segment overlooked when it comes to the impact of driverless trucks is the potential economic ripple across the industry.

“We’re talking about a huge economic impact, not just on the 2.9 million drivers out there, but on owner-operators, small fleets, small businesses,” she said. “And then the businesses that support trucking. They talked about losing truckers’ jobs but they didn’t talk about all the small businesses this would affect.”

The segment spent a significant amount of time highlighting the operations of TuSimple, a San Diego-based startup that is at the forefront of autonomous trucking operations. For the segment, CBS News’ Jon Wertheim rode in the back of the truck with representatives from the company as the driverless truck attempted a 65-mile loop through weekday traffic in Tucson, Ariz. The truck had a driver in the front seat in case of an emergency.

OOIDA President and CEO Todd Spencer says that for the foreseeable future, “the most important person in the supply chain is that person behind the wheel.”

“We should be reminded of that, especially right now, given what’s going on in the country,” he said, referencing the COVID-19 national emergency.

Spencer also said that the technology isn’t the only thing lacking in the widespread deployment of autonomous driving technologies. The existing infrastructure in this country, from roads to regulations, would need a massive overhaul as well.

“We don’t have a commitment from our leaders in Washington to doing things as simple as filling potholes,” he said. “So when you talk about doing something as immense as this, you’ve really got to roll your eyes.”

Check out the “60 Minutes” piece on autonomous trucking here. LL 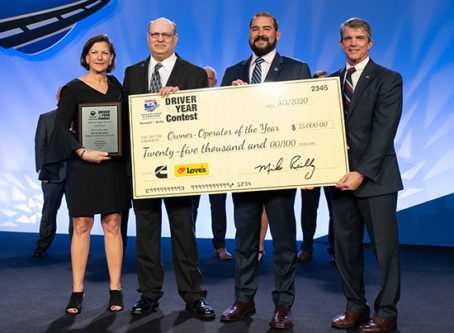